How to Make Bread Machine Jam

Making homemade jam in a bread machine is as easy as putting the ingredients in the bread pan, selecting the program, and hitting the start button. A bread maker is perfect for making small batches of homemade jam and you don't need any specialized equipment. Blueberry-lime jam was our first attempt at making bread machine jam and although the jam didn't set up well the first time around it tasted great, and as soon as the first batch was almost gone we tried a second batch that came out even better.

Making jam the traditional way has its pluses - it's great for making large batches of jam, and keeps for much longer in the pantry. But it also has its share of minuses as well. Traditional canning is a bit more time-consuming, requires more diligence, needs some specific equipment, and most importantly; requires some expertise in order to avoid food-borne contamination.

Bread maker jam also has pluses and minuses. The pluses - the only equipment needed is the bread machine, it's as simple as adding ingredients to a bread pan, you can walk away while the jam is cooking (usually 1.5 hours or less), and once the jam is finished it doesn't need water bath or pressure canning. The minus is the short shelf life: up to three weeks in the refrigerator or up to one year in the freezer.

How to sterilize mason jars:

You'll need some type of (preferably) glass jars to store the finished jam, and one-pint mason jars are an obvious choice. They're widely available, inexpensive, reusable, come with lids, and can be sterilized. Although the Cuisinart instructions only called for 'clean, dry jars', most home bread makers will yield enough jam to fill roughly three one-pint mason jars, and it doesn't take much time or effort to sterilize three jars. There may be other ways of sterilizing mason jars, but we use the boiling water method from info on the Center for Home Food Preservation website which recommends putting the mason jars right side up in a large pot, then filling the jars and pot with hot water to one-inch above the tops of the jars. Bring the water to a boil and boil the jars for ten minutes, then remove and drain. The NCHFP website recommends re-using the boiling water for processing the finished jars of food, but we reused the water for pasta since bread machine jam doesn't need any water bath processing.

How to make bread machine jam:

The bread maker we used to make blueberry-lime jam is the Cuisinart CBK-110 bread maker. You can read our CBK-110 review if you'd like some general info.

Here are the basic steps for making blueberry-lime (or any other) bread machine jam:

It'll take 1.20 hours from start to finish and the machine will beep ten times once the cycle is complete. Remove the bread pan and pour the cooked jam into a clean (preferably glass) bowl. The jam will be very hot so use caution when pouring. Don't worry if the jam looks a bit soupy at this point - it will thicken up a bit as it cools. Once it's cool, ladle the jam into the sterilized mason jars, add lids, then place the jars in the refrigerator for up to three weeks or in the freezer for up to one year. While you're waiting for the jam to cool, it would be a good idea to clean the bread pan and bread machine as soon as they're cool enough to touch. The sugar will crystallize as it cools and since the bread pan is handwash only, the sooner you wash it the easier it will be. The bread maker itself will probably only need a wipe-down, but it's easier to do that while it's still warm. The image below shows the blueberry-lime jam just out of the bread machine.

The first time we made blueberry-lime jam we followed the Cuisinart recipe which didn't mention mashing the blueberries and only listed 'pectin' in the recipe so we assumed that meant regular pectin, not low-sugar pectin. The first batch of jam tasted fine, but didn't set up very well so it was used for things like English muffins and waffles - it was too runny for plain toast or bagels. You can use the surplus blueberry juice as a syrup for pancakes, but we just poured it in a glass, added some seltzer, and drank it. No sense letting all that awesome blueberry nutrition go to waste.

After doing some research it seemed low-sugar pectin would have been a better choice than regular pectin. When we made the second batch of jam we gently mashed the blueberries, used low-sugar pectin, and mixed the pectin with some of the sugar instead of adding it to the bread pan by itself on top of the sugar. The second batch came out much more to our liking. If you have the Cuisinart bread maker you should try the recipe as written the first time around because you might like the consistency better, but if the jam doesn't set up as well as you like, maybe try making a few changes.

How many blueberries in a cup: 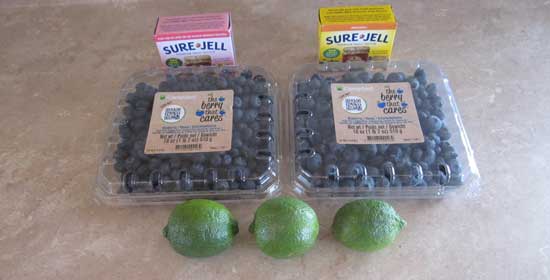 The cost of the blueberry-lime jam depends on several factors. We live in the Northeast and made the jam in the middle of winter when blueberries were out of season and the store-bought (Walmart) 18-ounce packages of blueberries which were imported from South America cost $6.74 each for a total of $13.48 for the blueberries. The limes were 3/$1, the sugar and one tablespoon of pectin came to roughly $0.50, so the total for the ingredients came to about $14.98. The yield was almost three one-pint jars of jam, so each one-pint jar cost roughly $5 each. Not bad for homemade jam. Obviously if you grow your own blueberries or wait for peak blueberry season when the price of the blueberries will be lower, the cost per pint would be less.

The jam was easy to make, tasted great, and is perfect for small families. The bread machine jam removed some of the angst of making jam using traditional canning methods, but still offered homemade goodness. We liked this blueberry-lime jam recipe because it had less sugar than some other recipes we found - just 1.25 cups of sugar to six cups of blueberries. There was a bit of trial and error involved, but nothing went to waste and learning is part of the fun. We'll definitely be trying other bread maker jam recipes in the near future.

Here are our Cuisinart bread machine jam videos. The one on the left (or top for mobile) is the first attempt at making blueberry-lime jam according to the recipe, and the other video is the second attempt using the low-sugar pectin: