The words "sweet" and "green tomato" wouldn't seem to go together very well, but when combined with a few other ingredients it makes a very delicious pie, and it's a great way to use of the inevitable end-of-the-season green tomatoes.

The recipe was emailed to me from a friend and comes from a site called pallensmith.com. His website says he got the Green Tomato Pie recipe from an 87-year-old woman from Kentucky who has been making the pie every year since the 1950s. It was a bit lacking in details so I've added a few notes.

The recipe was easy enough with the exception of needing to stir the filling constantly for about 6 minutes once the cornstarch was added (Step 3), and even that wasn't very difficult. The green tomatoes need to be peeled, but it's very similar to peeling an apple and since there were only about 10 tomatoes to peel it didn't take long. The recipe calls for four cups of tomatoes, which was about ten medium-sized tomatoes. The tomatoes shown in the image below are "Glacier" tomatoes and range in weight from three to five ounces. 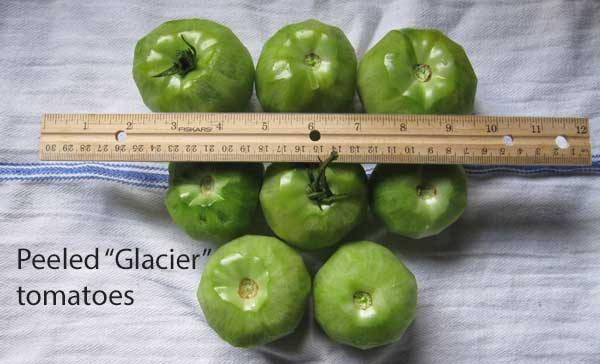 We used a Pillsbury refrigerated pie-dough crust which worked fine. The recipe didn't say whether to blind-bake the pie shell or not so the empty shell was put on a baking sheet while the oven was preheating which kind of split the difference between baked and not baked. Next time I'll blind-bake the shell and cover the edges of the crust with foil once the filling is added. The image below shows the cooked green tomatoes ready to be poured into the pie shell.

The filling doesn't look very appetizing when it's ready to be poured into the pie shell, but the pie smelled and looked awesome when it was removed from the oven. The pie was left to cool for an hour but it was still too wet to slice and ended up needing another couple of hours to firm up. The image below shows a slice of the green tomato pie. 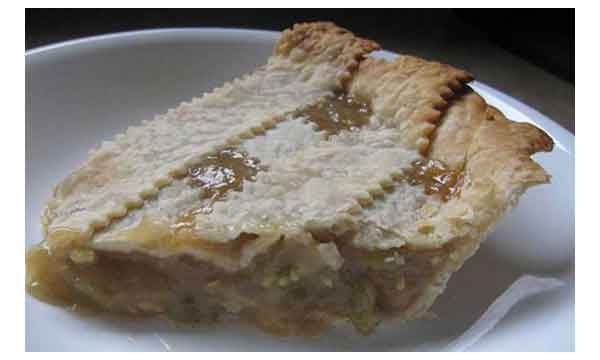 The pie was a tad sweet for us so we'll cut the suger to one cup next time, but a small glug of half and half helped to cut the sweetness. We're looking forward to next year's green tomato harvest so we can try making the pie again.