Artichokes were very high on our list of crops to grow but we had heard they were a bit difficult to grow. Turns out they weren't any trouble at all. They do take up quite a bit of space, and their growing season is about three or four months from seed to harvest. We only planted two artichoke plants this season ("Tavor" organic artichokes from High Mowing Seeds) and just out of curiosity decided not to harvest the buds but let them go to flower instead. The foliage isn't the most attractive, but the flower is very pretty, and bees and other insects loved the flower.

One of the reasons artichokes have a reputation for being difficult might be due to the need for vernalization. It's a small extra step that might sometimes get overlooked. When artichokes are grown as an annual, the plants need to be vernalized in order to initiate bud development. That means the seedlings need to be set in a coldframe or cool area where nighttime temperatures go down to 50° or below for a 10 day period. That's easy enough for those of us here in Zone 5 provided the seeds were started early enough, but it might be tougher for growers in warmer areas. The artichokes will still grow if they're not vernalized, but the mature artichoke buds probably won't be as tight. If you're having trouble getting artichokes to grow well, maybe try putting them in the refrigerator at night for 10 days prior to planting. 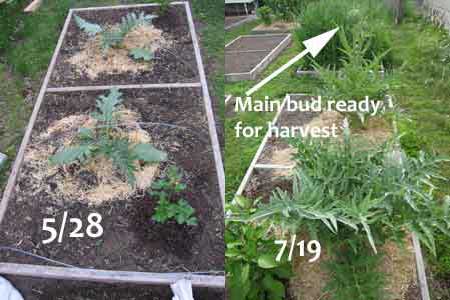 The seeds were sown in 3" cell packs on March 4, were transplanted on May 1 under double row cover at night (our last official frost date is May 31st), and the first bud would have been harvestable on July 19 had we not let the plants go to flower. Artichokes prefer full sun and well-drained soil, lots of organic matter, and a ph of 6.5-8.0. Artichokes reach a height of 3 or 4 feet and have a spread of up to 6 feet (ours were about 4 feet tall and 4 feet wide) so they need a fair amount of space. You could probably fit three artichoke plants in a 4' x 8' bed, but you should stagger the plants to allow for sufficient air movement.

Artichokes are fairly heavy feeders so they usually get one light application of Happy Frog Jump Start fertilizer when the seedlings are transplanted, then a few applications of Neptune's Harvest Fish and Seaweed fertilizer early on, followed by Big Bloom liquid fertilizer thereafter. Even though the summer was cool and wet, the plants were mulched with straw mulch. The artichokes were kept under row cover as long as possible until it got too warm and the plants got too big.

How long do artichokes take to grow:

The seed catalog said 90 days to harvest although it was more like 120 days for one plant and 150 days for the other, but it was a very cool, cloudy, and wet summer so that may have had something to do with the longer harvest time. There weren't any problems with pests or disease, and the artichokes were host to all manner of flying and crawling insects, probably good as well as bad, but it didn't seem to stress the plant at all. Aphids, ants, spiders, and ladybugs patrolled the stalk, while bees, hoverflies and other unrecognizable flying insects visited the flower. Mother Nature at her finest.

Here's a video that follows our Tavor artichokes from seedlings to flowering over a three or four month period. The video is from our second season growing artichokes.