Quinoa is native to the Andes mountains of Bolivia and prefers warm days and cool nights, so the quinoa grew well in our Zone 5 climate. Quinoa isn't as mainstream for raised bed gardeners as other crops, but the quinoa was easy to grow and experimenting with a new crop is always fun.

Growing quinoa from seeds or transplants:

Since this was our first season growing quinoa, it seemed like a good idea to try both direct seeding and transplanting. The seed pack recommended 12-18" spacing, and we went with 16" simply because that's how the raised bed divided equally. The seeds were sown in 2" cell packs and sprouted very quickly (within three days), so don't sow the seeds in the cell packs until the outdoor soil has warmed up to around 60°. The height of quinoa plants is usually 4' to 6' and the direct seeded plants ended up at around that height, but the transplants ended up over eight feet tall. The plants were kept under row cover for the first month, but that was more for insect protection than for protection from the cold. Some info said quinoa can suffer from flea beetles, but nothing seemed to phase the small transplants and next year I'll leave the row cover off. From seeding to harvest was about 90 days, but the harvest schedule got pushed forward due to excessive rain. 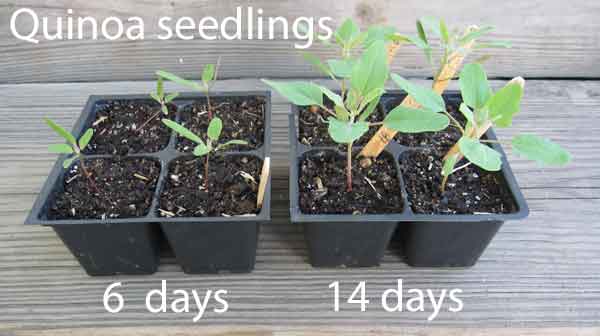 Whenever we plant a new untested crop we usually keep fertilizing to a minimum, preferring to see how the crop adapts to the soil without any additional nutritional help. The quinoa beds were planted with a peas, oats, vetch cover crop in early spring, then two weeks after transplanting the seedlings got an application of liquid kelp, then two weeks later some Neptune's Harvest Fish and Seaweed fertilizer, and a few weeks later one application of Fox Farm's Big Bloom liquid fertilizer. Liquid fertilizer was preferred because Iwe weren't sure what kind of root system the quinoa had and didn't want to damage any surface roots by scratching in dry granular fertilizer.

The quinoa didn't get any more or less water than any of the other crops. If the rest of the raised beds were watered, so was the quinoa. Our soil is a sandy loam that drains very well and although this year's rainfall was average, the distribution of the rainfall wasn't. We'd go through a week or two of dry weather, and then it would rain for 36 hours straight. That was a problem once the quinoa matured because the seed heads became saturated with rainwater and ended up snapping the stalks.

Most online info indicated quinoa is ready to be harvested when the leaves drop off the stalk and the seed heads start to turn color. Another source said the quinoa seed is ready for harvest when the seed is hard and difficult to dent with a thumbnail, but the seeds are so small I had a hard time using that method. The leaves dropped off about ten days before the seeds turned color, but we had to resort to Plan B for harvesting the seed heads because the excessive rain caused most of the top-heavy stalks to snap. The broken stalks were tied to a PVC drying rack for a couple of weeks and that seemed to work okay. The image below shows the quinoa stalks drying on a rack. 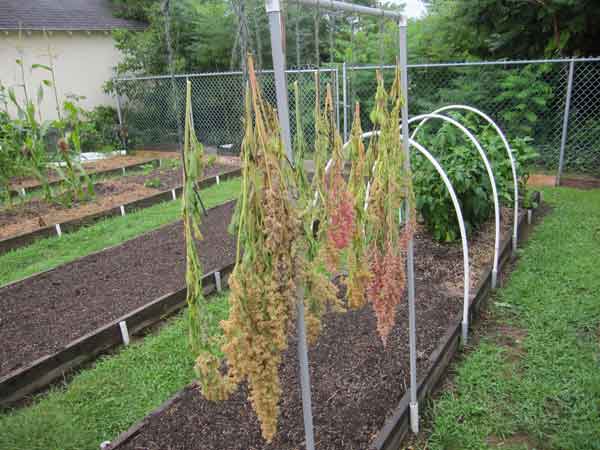 Once the quinoa has dried completely, it needs to be processed. Removing the dried seeds from the stalk is easy, but removing the chaff from the seeds was a bit tedious and time consuming. There's probably a better way, but after some trial and error the best option seemed to be rubbing the seed heads along the mesh of a mini salad spinner that's used to spin-dry our microgreens. Most of the chaff stays in the spinner basket and the seeds are then run through a mesh strainer which removes more of the chaff. The quinoa is dusty and needs to be rinsed, and we found if the quinoa was rinsed in a bowl, the remaining chaff floated to the top while the seeds stayed on the bottom.

Once the quinoa was cleaned, it was added to a small pot with 1 cup of water to 1/2 cup of quinoa, brought to a boil, reduced to a simmer and covered, then simmered for 15 minutes. Just out of curiosity I bought a box of store bought quinoa in order to compare it with the homegrown quinoa. The resulting textures were similar but the homegrown had a more definitive taste. Quinoa seeds are normally covered with a saponin compound that can have a slightly bitter taste, but bitter is probably not the best word choice as it normally means unpleasant. The homegrown quinoa tasted stronger than the store bought but not necessarily in a bad way. Comparing homegrown quinoa to store bought is a bit like comparing white meat to dark, a MacIntosh to a Red Delicious, or Bud Light to Guiness Stout. It's personal preference. 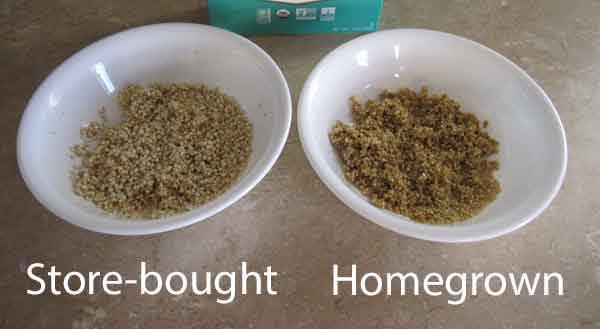 Where to buy quinoa seeds:

Quinoa seeds aren't as readily available as the more mainstream seeds, but that's starting to change as more growing info becomes available. You can try Botanical Interests or Territorial Seeds, or just do a quick search for more buying options. Almost all of my seeds come from High Mowing or Johnny's but neither sells quinoa seeds, and since we didn't want to create an account at another seed company just for two seed packs, we bought our quinoa seeds on Amazon and although we paid a couple of dollars more, it was preferrable to creating another online account. Just a note about buying the seeds on Amazon - the first time we bought the quinoa seeds the listing just showed a picture of the quinoa and no seed pack, and we didn't realize that was the non-organic version. The seeds arrived in a tiny zip-lock bag with very little info. The organic version will have a photo of the seed pack in the listing. The image below shows the non-organic seeds in the zip-lock bag next to the organic seed pack. 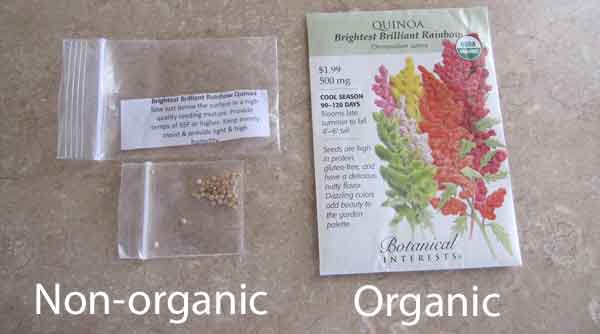 Here are two videos about growing quinoa. They're split into Part One and Part Two because there ended up being too much info for one video. Part One shows growing the quinoa from seed, and Part Two is the harvesting of the quinoa.