How to Make Soil Blocks

Soil blocks have been around for a number of years and are a great alternative to using plastic cell packs. Once the seedling is ready to be transplanted, the entire soil block is planted directly in the soil which helps to lessen transplant shock. Once you buy the soil blocker and planting trays, the only recurring cost is for the potting mix. Here's a short post showing how easy it is to make soil blocks.

The soil blocker shown below is the Ladbrooke 2" soil blocker. There are smaller and larger soil blockers available, but the medium-sized one is working out just fine for our needs. They make special soil blocker tubs, but you can use any kind of tub as long as it's waterproof. The one shown below is just a small (10" x 15" x 6") storage container from Lowes. 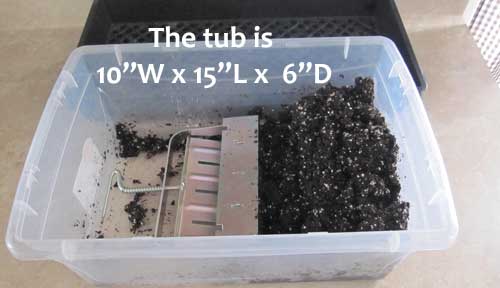 How to make soil blocks: 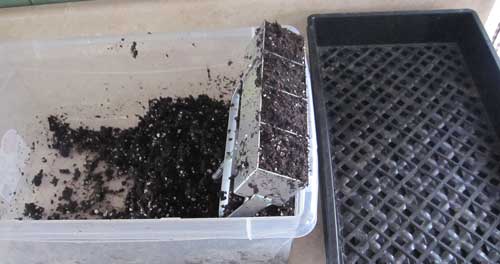 Hold the filled soil blocker fairly close to the seed tray so the blocks don't have far to fall. Pull up on the bar with your fingers while pushing down on the lever release with the heel of your hand. The soil blocks should come out easily. If not, it's no big deal. Just put the broken soil blocks back into the tub and try again. If you loaded the soil blocker by hand the first time, try the plunge and twist method and vice versa, or maybe add a bit more water to the potting mix. You may need to rinse the soil blocker after making a few rows of blocks depending on the makeup of your potting mix. 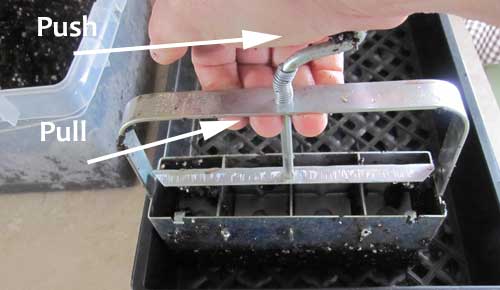 That's it! That's all there is to making soil blocks. Keep going until you have as many soil blocks as you need. Add your seeds, cover the flat with a plastic cover until the seeds sprout and you're all set. You shouldn't need to water the blocks for a couple of days depending on how warm and humid it is. Be sure to check frequently though because soil blocks end to dry out slightly faster than potting mix in plastic cell packs. 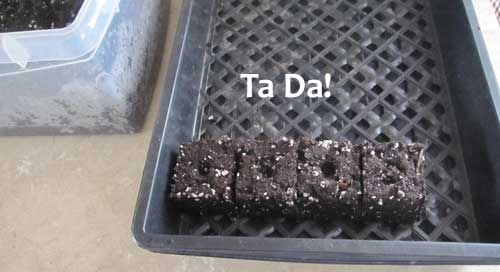 How to make soil blocks video:

Here's a video version of how to make soil blocks: