Stinging nettle is a very useful plant with lots of health benefits, but it can become invasive and is very painful to eradicate from the garden once it takes hold, so growing it in containers is a good solution.

Stinging nettle adapts well to containers and there are several reasons why you may want to consider planting nettle in containers instead of directly into the garden. Stinging nettle can become invasive under the right growing conditions and it's a very painful plant to weed from unwanted places. Nettle plants are wind-pollinated and containers make it easier to keep an eye on the growth of the seed heads to prevent unwanted pollination. Containers make the nettle plants very portable when the need arises, such as a backyard barbecue where inquisitive small children might come in contact with the nettle thorns.

Nettle seeds are small (about the size of a pin head) and while the seeds germinate quickly, the plants take a while to grow when started indoors. Our nettle crop was started indoors about 8 weeks before the last frost, but the nettle doesn't seem to like the artificial light and it took over five weeks until the seedlings were tall enough (2"+-) to transplant outdoors. Once they were outdoors in natural light however, it only took three weeks to go from a 2" seedling to a stinging plant over a foot tall. We're in Zone 5 with nighttime temps in the mid 40's, and daytime temps in the mid to upper 60's in the late spring/early summer planting season. The container size that seemed to work best with the nettle root system was the Fiskars 12" 'Ariana' container. The containers are inexpensive (around $12) and they have a large lip so it's easier to move the nettle plant without getting stung. You'll need to drill drainage holes, but that's not very difficult. The small nettle seedlings didn't get any fertilizer when in the cell packs, so some Happy Frog All-Purpose fertilzer was added to the soil mix before transplanting the seedlings into the containers. The containers are filled with 70% garden soil and 30% potting mix. 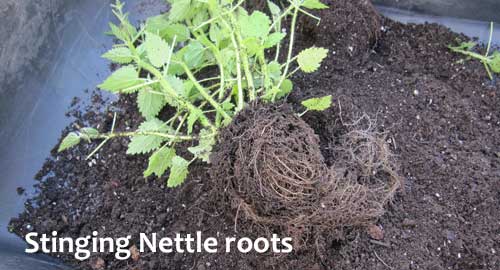 Where to buy stinging nettle seeds:

This is our third season growing stinging nettle from seed. The first year the seeds came from from Local Harvest.org, and the past two years they were from Amazon. It's the luck of the draw at both places as far as sellers, so read the descriptions and reviews before purchasing.

The first video is a short video showing the basic time frame from seedling to harvest, and the second vid shows what happens when you get stung by a stinging nettle plant.