For 2014 and 2015 the cherry tomato choice for our raised bed garden was "Matt's Wild" cherry tomato from High Mowing Seeds. Over the past two seasons Matt's has proven to be one tough little tomato plant and should be the official tomato of the USPS ("Neither snow, nor rain, nor heat, nor gloom of night stays these tomatoes from the swift completion of their appointed rounds."). The past two summers have not been ideal growing conditions for tomatoes in our area (very cool and wet), and while the other tomato plants struggled a bit, Matt's kept right on growing . . . and growing . . . and growing.

The plants grew so prolifically the first year they had to be cut down towards the end of August because they were blocking the sun from the tomatoes growing behind them, and they grew into the corn planted in the adjoining bed which blocked the pollen from getting to the corn silks. It also became impossible to harvest the tomatoes in between the tomato plants without stepping all over the rampant fruit and stems. The photo below shows the tomatoes from 2014 about a week before they were cut down. That's an 8' x 10' tarp and it took two loads.

There was enough seed leftover to plant the Matt's again in 2015. They had to be moved to a new bed anyway for crop rotation, and this time they were given a more open area. They still grew like crazy. Although the other tomatoes seem to like the soil as well, they didn't grow quite as robustly as Matt's. The layout in 2015 was two Matt's and one Indigo Apple tomato in the 4' x 8' bed, planted 24" apart. They were transplanted outside on May 28, and by late July the Matt's had practically overgrown the Indigo.

The photo below was taken at the end of August and shows the rambling growth. That's about six feet of space: 2' inside the bed, across a 3' path, and the Matt's Wild is encroaching almost 2' into the other bed. It's the same on the other side. In the lower right corner you can see the little red Matt's tomatoes have grown right through the Indigo Apple plant. 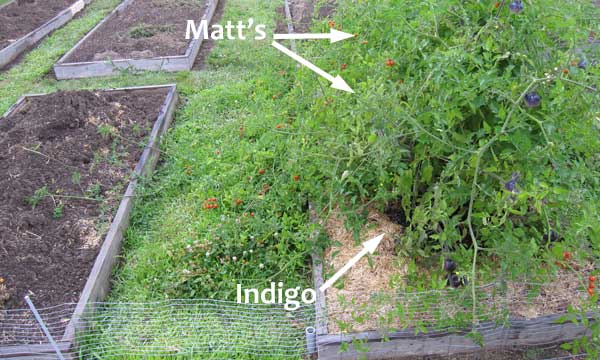 The plus side to all this exuberance is a non-stop supply of delicious cherry tomatoes. The seed catalogs mentioned Matt's had thin skins and are prone to splitting when picked, but we usually pick the fruits with the calyx still attached and remove it when the tomatoes are washed, so split skins weren't an issue. The other nice thing with Matt's is that quite a few entire stems of tomatoes ripen at the same time which would make a nice display if you have a market garden. Leaving any part of the stem attached looks farm-fresh or homegrown, just like leaving the greens atop carrots and beets. The photo below shows tomatoes that were picked in the middle of August, when they're generally harvested every other day. Those are half-pint baskets and each has 60 cherry tomatoes (+-), plus the tomatoes on the stem.

We're in Zone 5 so all our tomatoes tomatoes are covered in row cover as soon as they're transplanted, and they stay covered until the plants get too large to be kept under the row cover. They're mulched with straw mulch right from the start. The tomatoes seem to like our soil so they're given as little fertilizer as possible and always the minimum amount suggested on the bag or bottle. The tomatoes get one application of Fox Farm's Jump Start granular when the seedlings are transplanted, then Fox Farm's Tomato and Vegetable granular maybe once a month until the plants get too big to efficiently scratch in the granules. After that it's Fox Farm's Liquid Big Bloom if the tomatoes are still fruiting.

Both High Mowing and Johnny's carry Matt's Wild seeds, but Johnny's might not have the organic version. Both said Matt's has only moderate resistance to late blight, but there were no issues with disease of any sort on any of the tomato plants. If you have enough room, Matt's Wild is a great choice. It has proven to be one amazing little tomato plant.