There's quite a bit of info on home hydroponic systems, but since this was our first time growing hydroponically, we didn't feel comfortable making a homemade hydroponic kit from scratch and decided on a Deep Water Culture (DWC) five-gallon bucket kit. It was a good choice for a beginning hydroponic project.

Almost all the hydroponic info I've read said for optimal nutrient uptake the water ph needs to be between 5.5 to 6.0, and water temps between 60° to 90°, but our hydroponic setup wasn't even close to optimal specs. The lettuces were grown in the basement under artificial lights, with air and water temps in the low to mid 50s and about 50% humidity. The ph of our municipal water is on the alkaline side at about 6.7, and the reason for not adjusting the ph was (once again) purely financial - since this was our first foray into hydroponics we didn't want to spend any more money than necessary in case we didn't stick with it. The ph buffer solution would've added another $15, so we decided to see what would happen with the slightly alkaline municipal tap water. As far as water temperature, there was no economical way to raise the water temp so it was 52° or nothing. Good thing lettuce is a cool weather crop.

Another reason for choosing this hydroponic kit was because it didn't come with any nutrients. The Fox Farm line of hydroponic nutrients was our first choice and it didn't make sense to pay for nutrients that wouldn't get used. Fox Farm has a hydroponic feeding schedule on their website which was fairly easy to figure out for plants like peppers and tomatoes, but a bit confusing (to me) for lettuces. Since the lettuces were going to be stressed enough with the high ph and low temps, I emailed Fox Farm to ask about the best way to fertilize hydroponic lettuces with their Grow Big nutrient. They were very helpful and said ". . . for lettuce you'll want to apply dosage rates from weeks 1-3 only, as you do not want them to flower . . .", so that was the feeding schedule employed.

Figuring out when to change the nutrient solution wasn't easy, as there is quite a bit of info and some of it is plant-specific and even contradictory. The feeding schedule called for adding nutrients every week but it didn't seem like a good idea to add so much 'food' to the existing water, especially for a shallow rooted crop like lettuce, so the nutrient solution was changed at the two-week mark, but that may have been a mistake.

Up to that point the hydroponic lettuces were growing larger and faster than the soil-based lettuces, but once the nutrient solution was changed, the hydroponic lettuces seemed to stop growing and the terrestrial lettuces kept going. Maybe it was root shock from the fresh water, but next time we'll use the same water for the entire 30 days to see what happens. For crops like cucumbers or tomatoes which have a longer growing season the water may need to be changed more often, but the 30-day lettuces might be okay without changing the nutrient solution.

Here are a few pics of the hydroponic lettuces at their various stages of growth: 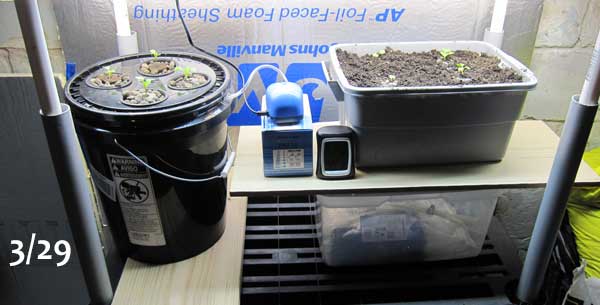 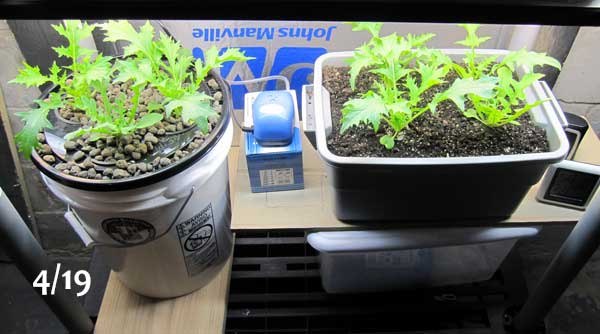 Would we buy it again?

Yes, we're happy with the hydroponic kit. The five gallon kit may be overkill for lettuces, but the only way to discover that was by actually growing the lettuces. We've already purchased a one-pot lid and our next project will probably be cucumbers. Looking towards the future, Hydrofarm sells a 3.5 gallon bucket that would make more sense for lettuces, and we're going to try making our own three gallon home hydroponic tub style system this winter. It's been an interesting project and the lettuce crop came out okay even though we made a few mistakes and subjected the plants to less than perfect growing conditions.

Here's a video of our first hydroponic lettuce crop: