During my late afternoon daily plant check a few weeks ago, there were a few flies hovering around the top of the row cover trying to find a way out, and the next day there were quite a few more. When the row cover was opened, several dozen bugs were crawling drunkenly along the straw mulch in addition to the ones flying around. They looked like a cross between a beetle, a mosquito, and a skinny fly. Turns out they're called fungus gnats, although they look more like flies than gnats. Around my area gnats are usually much smaller, closer in size to midges and no-see-ums, but someone named them fungus gnats so that's what they're called. 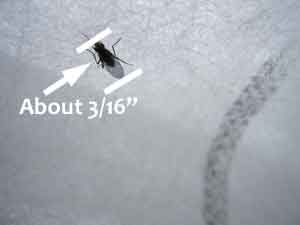 Although fungus gnats are found more often around houseplants than out in the garden that may be due to being mistaken for flies outdoors, and if they don't get trapped inside row cover they aren't really noticeable unless you happen to see them lumbering along the soil.

Once they hatch, they just crawl around until they can fly away, and I'm not really sure where they came from. Maybe they were always in the soil and this year the rain, sun, and temperatures came together in the correct proportions that allowed them to hatch. They didn't seem to be bothering the plants, but since there were so many (at least a couple of dozen) crawling in the mulch some kind of action was necessary as they would be airborne very shortly. The fungus gnats were also showing up in a couple of other beds at this point, and ended up in three out of sixteen beds. Even though the gnats didn't seem to be doing any damage, there weren't going to be afforded any opportunity to change their eating habits and start chowing down my vegetable seedlings.

Since the fungus gnats were trapped under the row cover, sticky traps seemed to be the best short-term solution. 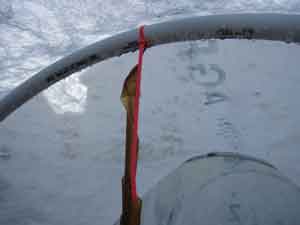 Obviously you can't use a sticky trap out in the open garden because it will trap anything that lands on it, the good bugs as well as the bad bugs. There are several choices when it comes to sticky traps but the most popular are the sticky cards and hanging ribbons. They're both inexpensive and easy to set up. The ribbons were zip-tied to the row cover PVC and the sticky cards were put on the ground. The fly ribbons are available at Walmart and most home and garden centers, but Amazon carries a large selection of sticky fly ribbons if you don't have any brick-and-mortar stores nearby. If you have flies or gnats in your home and they hang out on the window, try window fly traps instead

The fly ribbons seemed to work best because the fungus gnats only crawl on the ground when first hatched, and not that many crawled over the sticky cards. Once they started flying however, there weren't any places for them to alight to rest except the fly ribbons, so the ribbons filled fairly quickly. The sticky ribbons are about 30" long but since our row cover supports are tall, the plants were still small, and the ribbons were only in place for a couple of days, there was no issue of the glue on the ribbons coming in contact with the plant's leaves.

When installing the fly ribbons it helps if the small, round cardboard containers are somewhat warm as the ribbons are coiled inside the containers and won't want to uncurl if they're cold. If the weather is too warm however, the ribbons will be more likely to stick to anything they come in contact with including hair, skin, clothes, or even pets. The package says to use peanut butter or vegetable oil to remove the glue, but it wasn't very warm when they were installed and didn't have any problems with the glue, so we can't say how hard it is to remove. 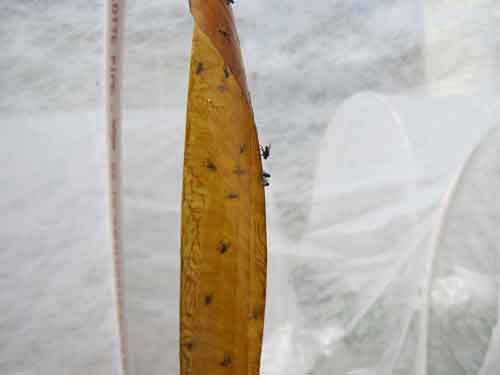 It's been about three weeks and there havn't been any more gnats so I'm guessing there's only one life cycle, but once the row cover is removed there's no way of knowing. Hopefully the fungus gnats won't return next year but if they do, the fly ribbons worked very well as an inexpensive, non-chemical control and we'll use them again next year.