Growing Microgreens in the Basement

Gardener's cabin fever usually sets in around January or February here in the Northeast, and this year our cabin fever remedy was testing how well microgreens would grow in our unheated basement under artificial lights. This was our first time growing microgreens indoors so it was trial and error, but the microgreens did surprisingly well.

Our basement is totally dry - there's not even a sump pump hole in the floor. Papers, magazines, and old clothing have been stored for years without any worries about mold or mildew. If your basement is wet (or even damp), you'd be better off choosing a location other than the basement for growing microgreens because vegetation of any kind adds moisture. The microgreens are also being grown during the winter when the Northeast air is very dry, and our heating system uses forced air which makes the air even drier. At the very least you should purchase a humidity monitor ahead of time to get some readings just to make sure. The monitor used throughout our home is an AcuRite humidity monitor, which runs about $10 at Amazon or WalMart. and is well worth a few dollars to avoid any mold or mildew issues.

Microgreens aren't picky about their containers and don't need anything fancy, but you really want to go with containers that are made for food storage. The produce containers you get from the grocery store are fine, and it's a great way to upcycle the containers. We bought a large selection of microgreen seeds, so numerous small containers of different sizes and shapes were better for this project than a few large containers. The shallower pans seemed to work better, especially when it came to harvesting the microgreens. None of the containers had drainage holes, but it was easy to drill a few small holes in each container. The basement temp was a cool 52° so the microgreens didn't need much water, and this step probably wasn't necessary for our setup. The containers were identified by a piece of masking tape with the microgreen's name. The photo below shows the containers that were used.

Microgreens have a very short (roughly two week) growing season so a good soil mix is important. There are many potting mixes on the market, but our usual choices are ProMix (without the mycorrhizae), Johnny's 512 mix and Fox Farm's Ocean Floor mix. The soil mix needs to be wet, but not soggy. Once the seeds were sown, they were lightly misted with (warmed) water, and humidity domes were used until most of the seeds sprouted. You can always supplement the potting soil with fertilizer, but exercise caution if you're aiming for organics. The microgreens were harvested within two weeks and didn't get any fertilizer, but the lettuce mixes and cress have a longer growth cycle so they were given a weak solution of Fox Farm's Liquid Kelp fertilizer at the two week point.

When buying microgreen seeds, buy from a reputable company. Our seeds came from High Mowing, but there are many other seed companies to choose from. The microgreen seeds may seem expensive up front, but you don't need a lot of seeds and when you compare the cost of your organically grown microgreens to store-bought, the seeds are a bargain. When choosing the best microgreens to grow it's best to pick greens that mature at the roughly same rate so if you're just getting started, go with a microgreen mix. If the greens mature at different rates there's a minor issue with keeping the lights at the correct height. 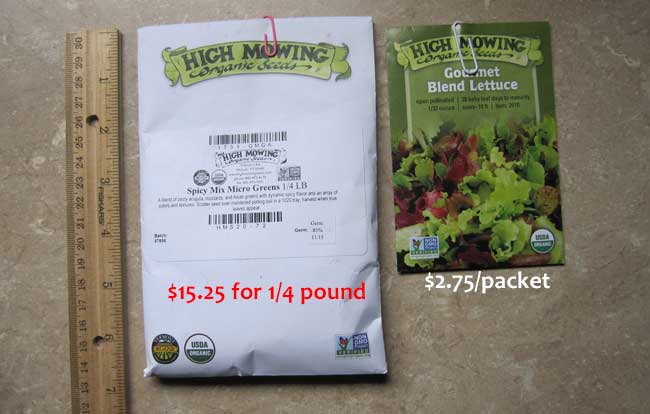 All plants need light in order to grow and since basements typically don't have any natural light at all you'll need to provide a decent light source. Our regular flourescent light fixtures used for seed starting worked just fine. One is a shop light with two T8 bulbs and the other is a two-bulb T5 grow light fixture. There's an overwhelming and sometimes contradictory amount of information about the best T8 bulb to use for seed starting so we went with one cool blue and one warm red, and the containers were spun 180° each morning when the lights were turned on.. The T5 bulbs are more of a full spectrum light, and since both bulbs were the same, the trays under the T5 bulbs didn't need to get rotated. Each week the seed trays were moved from one shelf to the other in order to expose the microgreens to both the T8 and T5 bulbs. The lights were kept about 2-3" above the greens and were turned on around 6 a.m, and shut off around 6 p.m. daily. The lights raised the temperature a few degrees, but since the basement temp was only 52° this wasn't an issue and was actually a good thing.

The following video chronicles the microgreen growth from January 14th to February 4th.