Small seedlings need warmth to survive, but too much of a good thing can be just as bad as no heat at all. Using a heat mat thermostat to regulate the potting soil temperature so that it mimics the natural cycle of warm during the day and cooler at night will ensure healthy and happy seedlings.

Our seed-starting setup uses a large (five-foot) commercial heat mat, and the Hydrofarm thermostat did a good job regulating the heat mat considering it's not really designed for commercial use. It's easy to set the target temperature, has a digital readout, is reasonably priced (around $38), and the probe sensor is small enough to fit in the the smaller cell packs or soil blocks. The one minor disadvantage is that the temperature range only goes down to 68° which isn't terrible, but we'd prefer to lower the night-time temps down into the upper 50s once the seeds are a couple of inches tall. Other than that, it worked great. 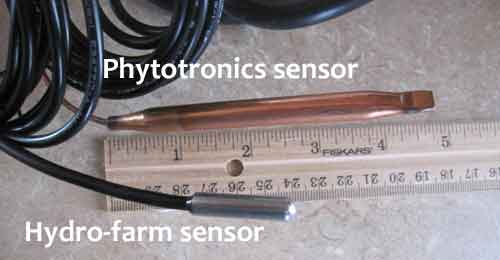 There are a couple of drawbacks to the large model for our setup. The temperature sensor probe is way too large at 4" long. It would work fine with full flats, but not with small cell packs. The other small drawback is that it doesn't have a digital readout so you have to trust that the unit is at the proper temperature. To set the thermostat the dial is turned to the desired temperature and a red light lights up to tell you the unit is on, but there's no temperature readout. It's always a good idea to check the cell packs with a soil thermometer anyway, but a readout would be a nice option, especially for $92.

Where to buy the thermostats:

The small Hydrofarm thermostat is widely available at garden centers, WalMart, or on Amazon, and the large Phytotronics thermostat can be found at Johnny's Seeds or Amazon. Johnny's also sells a larger model that has four outlets and sells for $139, and Amazon has a similar four outlet model..