Making homemade suet cakes for your feathered friends is easy using ingredients you probably already have on hand, and they aren't any more expensive than the store bought suet cakes. Plus, the birds absolutely love them and they provide some much-needed energy for the long hard winter months.

There isn't actually any suet in the cakes so they really should be called peanut butter bacon cakes, but suet cake is the accepted term for bird food cakes even if something other than suet is used. After researching homemade suet cakes it came as no surprise that raisins, nuts, oatmeal, sunflower seeds, suet, and peanut butter were the most common ingredients. We just ballpark the ingredients, but if you prefer actual recipes, here's a link to a page on the Baltimore Bird Club website that has a few suet cake recipes, and another popular site is Sialis which has a few more recipes.

What's the difference between suet vs. tallow vs. shortening vs. lard? It seems that they're all a form of fat, with the name change coming from the processing. In a nutshell: suet is a hard white fat that usually comes from beef or mutton. When suet is rendered (melted, strained and cooled), it's referred to as tallow. Tallow is used to make shortening. Shortening and lard are sometimes used interchangeably, but lard is normally pig fat and shortening (think Crisco) is made from a blend of partially and fully hydrogenated palm and soybean oil. It was really a moot point though because the grocery stores in my area don't normally carry beef suet or tallow, so I used bacon fat and Crisco instead. 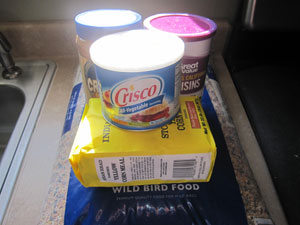 The birds weren't going to care about name brands, so the ingredients are generic no-name raisins, chunky peanut butter, and inexpensive bacon from Walmart. The cost for the ingredients seen in the photo (the bacon is not pictured) was $26, with the 20 pound bag of bird seed on the bottom accounting for almost half ($12) the total cost. The batch of suet cakes only needed 3 cups of bird seed per 8 cakes, so the actual price for the cakes would be much lower if a smaller bag of bird seed was used. The ingredients made 16 very dense suet cakes which came to $1.63 per cake ($26 divided by 16 cakes) with about 19 pounds of bird seed left over, which was used to supplement the suet cakes for the birds that prefer seeds to suet.

To make the suet cakes, cook the bacon then remove the bacon leaving just the fat. Add 20 ounces of peanut butter (half the big jar), one cup Crisco, and heat the mixture over medium/low heat until everything just starts to melt. The mixture was poured into a 2.5 quart Pyrex bowl, then about one cup of cornmeal and half-cup of flour was slowly mixed in. Three cups of bird seed and a few handfuls of raisins were the last ingredients added. The still-warm mixture was poured into two square cake pans (9"x9"), which worked out well for the proper dimensions of the suet cake holder (about 4" x 4" x 1" thick). Don't make the cakes too thick or they won't fit into the holder. The mixture cools quickly so the individual cakes before they get too hard. Once they were cool they were wrapped in plastic wrap and put in the freezer.

The birds love the homemade suet cakes and even the starlings won't eat the store-bought cakes anymore.