There are several ways to secure row cover such as dirt and stones, but sandbags aren't crazy expensive and they keep the row cover cleaner and drier. Rocks, stones and brick are free and reuseable, but the row cover is so thin that even smooth stones can cause it to tear, especially if you're using ultra-thin row cover like the Agribon AG-15. Sandbags do cost money for both the sandbags and the sand, but they last for several seasons so the cost is spread out over a few years.

How much sand to fill the sandbags?

The size of the sandbag is 14" x 26" and one bag of play sand (think it's 50 pounds) will fill roughly two and a third sandbags. Sand seems works better than gravel and the sand is washed so it won't leach anything into the soil. If you want to use gravel, go for smooth stones like pea gravel or small river rock, not the sharp marble or granite chips. The bags of sand or gravel in our area are about $4 for a 50 pound bag so the cost to fill 60 sandbags was around $129 (27 bags of sand at $4/each and 60 sandbags at 35¢/each) which sounds expensive, but that comes to only $65 per year over a two year period and most of the sandbags are good to go for another year.

You can probably lower the price even more if you buy the sand in bulk, but that didn't work for us because the sandbags were filled on an as-needed basis as the number of raised beds increased, so buying individual bags of sand was a better option even though it was more expensive. The image below shows a bag of play sand and bag of pea gravel used to fill the sandbags: 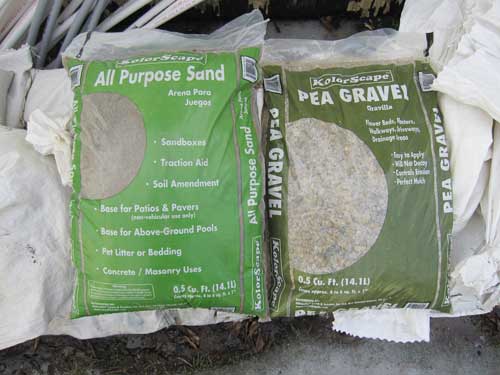 In our raised bed garden each 4' x 8' bed that's covered with row cover gets a minimum of four sandbags per bed. The beds in the path of the prevailing winds get at least six sandbags. That comes to roughly 60 sandbags total, so purchasing 100 sandbags for around $35 was the most economical option. The sandbags are out in the elements 24/7/365 days a year, and get stacked on a pallet for the winter where they stay until spring. The pallet is 3/4" plywood on a 2x4 base with holes drilled into the plywood for drainage. This is the third season for the sand bags and a few of the bags are starting to degrade, but that's not surprising given the constant outdoor exposure to sun, ice, and snow. The string that ties the neck of the bag closed is usually the first part of the sandbag that needs to be replaced, but that's easily fixed by threading a new piece of twine into the bag as shown in the second photo below. The first image shows the sandbag storage pallet. 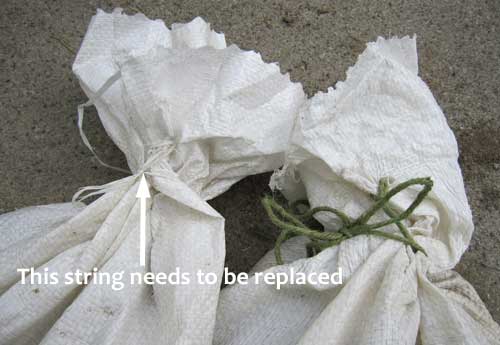 Where to buy sandbags:

Sandbags are used for many different applications such as sandbag fitness, weights for photography equipment, and military sandbags, so when searching try using 'polypropylene sandbags' in order to narrow down the choices. Home Depot sells sandbags, but they aren't always sold in the B&M stores so you'd need to order them through Home Depot online. Make sure you get the polypropylene sandbags, not the Quickrete sandbags. Those are filled with concrete dust not sand, and may leach into your soil. Amazon carries sandbags, and the ones we bought are from this seller, but there are several other sellers that sell sandbags so check for the best price.