Row cover is a worthwhile investment, especially for gardeners in colder climates. Row cover can be used for frost protection, wind protection, extending the growing season, and also offers an organic solution for deterring voracious bugs. There are several brands of row cover on the market but the Agribon has been working well for us. Other row cover brand names are Remay, Typar and Agryl.

Our main reason for using row cover is to keep insects off the vegetables. Hot pepper spray, castille soap, and garlic sprays are used for organic pest control but they had no effect on the bugs that were attacking our vegetables. The only other alternative is harsh chemicals, which is simply not an option. The row cover not only keeps the insects off the plants, it helps to interrupt their life cycle by not giving them a place to lay their eggs. It doesn't stop all the bugs, especially the really tiny ones, but it certainly helps and it keeps our vegetables chemical-free.

The AG-15 used to be called row cover but now it's usually classified as insect netting so if you don't see it under row cover, try searching for insect netting. Another plus with the Agribon is that it has a green stripe across the top. A green stripe may not sound important but if you live in a windy area and usually secure the row cover alone, having a stripe across the top makes covering the raised beds a whole lot easier.

Choosing the best row cover for your vegetables will depend on your climate, and you may end up buying several weights of row cover before you figure out which one works best for your area. Our first two seasons we purchased both the AG-15 insect netting along with the AG-19 for frost protection, but by the end of the season it became difficult to tell the difference between the two weights so now we only buy AG-15, and if more frost protection is needed overnight, the row cover gets doubled up.

The AG-15 row cover is very thin which allows plenty of light to get through and doesn't trap as much daytime heat so the row cover only needs to be removed on very hot sunny days, but the row cover tears easily. When buying row cover check the size of the row cover, especially the width. The length of the bed is easy to measure but to figure out the width, put the row cover supports in place, run a piece of string from one side of the bed to the other, then measure the string adding the extra footage needed in order to secure the row cover. The image below shows two layers of row cover one inside the other.

Caring for the row cover:

At the end of the growing season the row cover is laid out on the driveway and allowed to dry completely. Once it's dried, dirt or dead bugs are gently brushed off, then the row cover is folded and stored for the winter. It's a bit of extra work, but most of the row cover has lasted through two full seasons and will be used again this year. 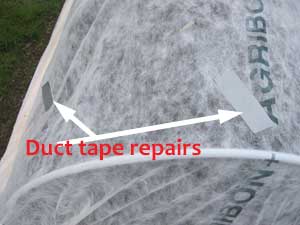 When measuring and cutting the row cover the cuts don't have to be perfectly straight, but it's best to get them fairly close. If the cuts aren't even the errors compound with each subsequent cut, and that creates unnecessary waste. The image above shows a T-square being used to mark a straight line, but if you just make two measurements on either side of the row cover and draw some kind of a straight line between the two, you'll be fine.

Where to buy row cover:

There are many places to buy row cover online but if you're buying large rolls like the one pictured above be sure to check shipping costs. The 250' row cover is shipped in a roll about five feet wide (that raised bed to the left of the image is four feet wide) which makes it easy to unroll and measure. The 250' rolls of Agribon AG-15 are $63 each at Johnny's Seeds and while that may sound like a lot of row cover, it's much less expensive in the long run. Amazon also sells Agribon at a competitive price (sometimes with free shipping), but so far they only have the AG-19, and only in the 83" width.