Cabbage soup resurfaces every few years as a diet craze, but it's been a personal comfort-food favorite of ours for many years. This cabbage soup recipe is just a basic recipe, with the filler ingredients (potatoes, sausage, vegetables, etc.) being added later when the soup is reheated.

We've never made any less than five quarts and the recipe is based (roughly) on that amount. The nice thing about the recipe is that it doesn't have to be exact. If you need to use up two onions, just throw them in there. Don't have four cups of cabbage? Just use what you have. The soup keeps well in the refrigerator and five quarts serves three people for four or five suppers depending whether potatoes and/or sausage are added to the soup. 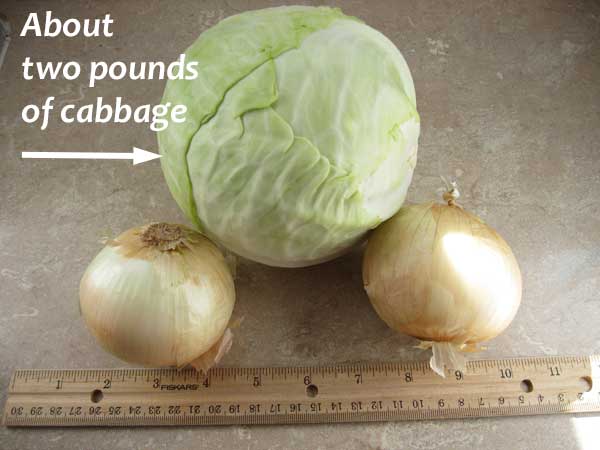 We've found that it's best to make the basic soup base first and once the soup is cooked, the fillers (potatoes, broccoli, etc.) are cooked in a separate pot then added to the soup while it's reheating. The only exception are carrots or brussel sprouts because they can withstand the reheating process without turning to mush. Potatoes added to the initial soup tend to fall apart with any leftovers that are kept in the refrigerator, so they're cooked separately and added to the reheated soup. Carrots and brussel sprouts are added just after the the soup comes to a boil. If you're making less than five quarts you can probably add the potatoes or broccoli ingredients directly to the initial soup. When adding sausage, we saute the sausage in a pan large enough to reheat the soup, then add the soup in with the sausages.

This isn't meant to be a cabbage soup diet recipe, but you could probably cut some of the calories by eliminating the butter. With the exception of the cabbage, all the ingredients are available organically in our area which ups the health factor even more. Serve it with some nice crusty bread to make it a filling, satisfying meal.