Onion and pudding is not a word combination you'll hear very often, but we tried a recipe for Onion Bread Pudding recently and it came out great. It can be eaten hot or cold, and compliments a wide variety of foods such as chicken, ribs, and egg dishes. Most of the ingredients are items most cooks have on hand, and the prep was easy.

I made several changes to both the ingredient list as well as the instructions, but the recipe's genesis came from Texas Home Cooking (Amazon) by Cheryl and Bill Jamison ©1993, ISBN 978-1-55832-059-8.

These are some of the changes made:

The recipe called for half a medium onion but how big is a medium onion? The photo below shows the size of the onion used in the recipe and how much it yielded (about .75 cup). I did find a handy chart for future reference at the National Onion Association website which gives guidelines for onions sizes and their yields.

The bread was a store-bought Italian loaf and worked fine, but next time I'll use mostly the white part, keeping the crust to a minimum and tear the pieces into smaller chunks. The taste was fine but too much crust and large chunks impacted the aesthetics. The recipe called for toasted bread pieces so the chunks were put on a baking sheet and into the cold oven while it was preheating. They came out almost toasted, but I wanted it to be more like pudding than stuffing so I figured it was okay that the bread wasn't totally toasted by the time the oven preheated.

The onions and garlic were cooked first and allowed to cool until just warm to the touch. The recipe says to add the onions to a bowl then add the remaining ingredients, but I added the wet ingredients first in order to mix the eggs well, then added the cheese and onions. The bread was added a handful at a time in order to gauge the moistness of the mix. It only needed a little over 3 cups, but the amount of bread will depend on what kind of bread you're using. The Pyrex dish used measures 7.5" x 11".

The 30 minute timing worked well but as always, ovens differ so check earlier. It didn't call for rotating the pan, but I did so anyway at the halfway point. The dish was removed at 30 minutes and it came out perfect. The recipe says to serve it hot, but since there were only two of us (it serves 4-6), there was some leftovers and the onion pudding tasted great the next day at room temperature with some scrambled eggs. It's also not bad cold right out of the fridge,either. 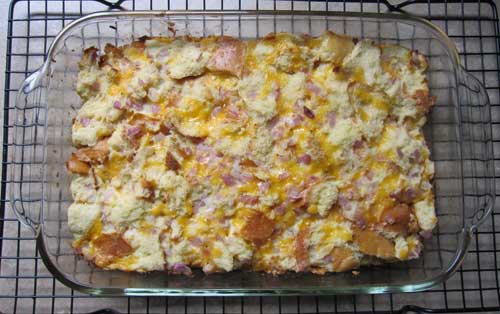