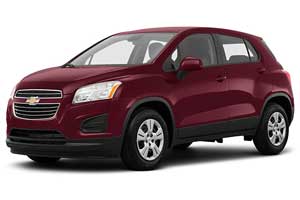 The 2016 Chevrolet Trax LS is our first new car in almost nine years and the Trax wasn't even on our shopping list. Hatchbacks such as the Hyundai Accent, Nissan Versa Note, Ford Fiesta, and Chevy Sonic were more in our price range. It was while looking at the Sonic that we saw the Trax and although the MSRP was roughly $4k more than the hatchbacks, after pressing each dealer for an out-the-door price, the price margin had been reduced to $2,300 so we ended up buying the Trax. We're happy with it overall and thought I'd write a short review now that we've had a chance to drive it for about a month. Everyone values something different in a vehicle and for us the two big pluses were the cargo space and price. For others it may be the infotainment system, and what follows are just my basic observations. You can always search places like Kelly Blue Book and Edmunds for more reviews. Edmunds has the most Trax reviews and while Edmunds itself isn't overly impressed with the Trax, the actual owners are very happy. For detailed specs you can visit the Chevy.com website.

The LS model doesn't come with roof racks so we paid extra to have them installed by the dealer, and it was money well spent. Not sure which brand they are because we only received partial paperwork. Here's a pic of the roof racks installed and a pic of the paperwork:

Would we buy the Chevy Trax again?

All in all we're very happy with the vehicle. It's at an affordable price point with just enough bells and whistles. The gas mileage is very good and the cargo space is awesome. The only minor downside for us was the automatic lights and the windshield wipers.

Here's a basic overview video of the Trax. Our driveway is fairly short so the video was shot in a Walmart parking lot in order to be able to show you the digital dash and the backup camera in action. The vid was shot early on a drizzly October morning, so the light isn't the greatest which makes the video a bit grainy.