We've been looking at air fryer toaster oven combos for several months and finally decided on the Black and Decker Crisp 'N Bake Air Fryer Toaster Oven. We've never used an air fryer before but the Crisp and Bake toaster oven offered a good combination of functions and convenience, while still being compact enough for our fairly small space, and it was reasonably priced.

The Black and Decker Crisp 'n Bake has five functions: toast, bake, air fry, broil, and keep warm, which are controlled by three control knobs: function, timer, and toast. The oven has a 60-minute timer along with a stay-on timer for longer durations, but if we were going to cook something for that amount of time we'd just use the regular oven. The toaster oven is large enough to fit six slices of toast or a 12" pizza. There's no interior light, but the large glass window gives you a good view of the food during the cooking process.

It comes with a wire oven rack, drip tray/bake tray, air fryer basket, and slide-out crumb tray. It's made of stainless steel, is rated at 1500 watts, and comes with a two-year limited lifetime warranty. The Black and Decker website said hand wash only but the instructions seemed to indicate that the wire rack could be put in the dishwasher. The image below shows the three function knobs: 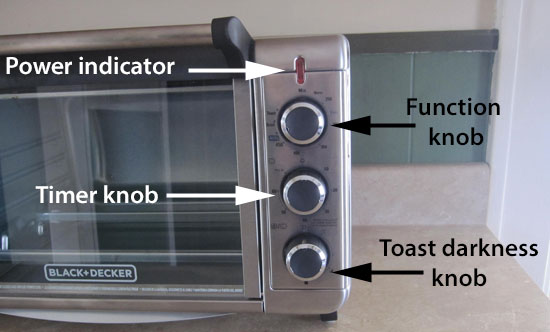 The specs on the B&D website has the height listed at 11.2" tall which is the height of the oven itself, but if you include the handle the height is 12", so the overall dimensions are 18" long, 12" tall, and 14.1" deep. The interior dimensions are 12" wide by 11.5" deep. With the wire rack in the lowest position there's 5" of clearance between the rack and the top heating elements, and the instructions recommend keeping food 1.5" away from the heating element. According to Black and Decker the toaster oven weighs 16 pounds. It wouldn't fit on our scale so we'll take their word for it. The image below shows the dimensions for the Black and Decker Crisp and Bake air fryer oven: 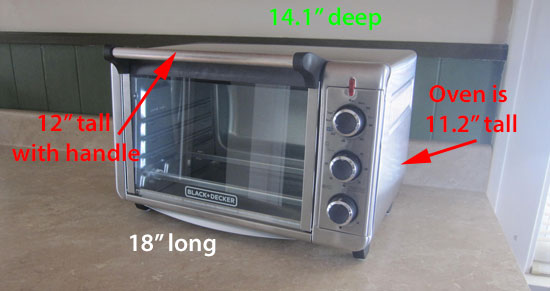 You can download a pdf of the instructions from the B&D website before buying but the instructions are basic and only cover setup, using the control knobs, and safety info. There's no information on cooking, recipes, or air frying times, so plan on some trial and error when it comes to cooking if, like us, you've never used an air fryer before. Cuisinart offers a basic air frying chart, but their air fryer is 1800 watts and the B&D air fryer is 1500 watts so it's probably not the same. It would've been nice if Black and Decker included some info on air frying times for the popular air frying foods like fries, wings, and chicken tenders.

We decided early on that we really wanted an air fryer/toaster oven combo, although while searching on Amazon we did consider the Oster Dura Ceramic Air Fryer in the beginning. The popular Cuisinart Toaster Oven Air Fryer was our first choice but at $199 it was a bit expensive, so we were really happy to find a more affordable alternative even if it doesn't have as many bells and whistles. There are only two (sometimes three) adults in our house at this point and we usually only eat together on the weekends, so we already love the convenience of having an appliance that cooks single servings but that can also perform five multiple functions. Think eggplant parm heroes, which are one of our absolute favorites. The oven can toast the bread, air fry the eggplant, bake the eggplant, marinara sauce, and mozzarella for a few minutes, then broil the cheese to an oozy deliciousness. All while keeping cleanup to a minimum. Yes, please.

Where to buy the Black and Decker air fryer toaster oven:

The Black and Decker website has it listed for $59.99, but that price might not include tax or shipping. It recently became available on Amazon and both Macy's, and Kohl's carry the oven. We don't have a Macy's nearby but we do have a Kohl's, which is where we bought the air fryer oven. It was listed at $99, was on sale for $89, and Kohl's had a 20% off coupon bringing the price down to $74 including tax. Plus, we got $10 in Kohl's cash.

*** Price update: A lot can happen in two weeks. The price at Kohl's has dropped from $99 to $79, and the price at B&D has jumped from $59 to $79, and even though they've raised the price it's showing as sold out. There were only nine reviews two weeks ago and there are now 21 reviews, and quite a few of the new reviewers received the product for free (it'll disclose that in the review). The image below shows the old and new price:

*** Cooking guide update: A couple of weeks ago Black and Decker released a cooking guide and air fryer chart for the air fryer. It's not on the website yet so you'll need to contact them at the Black and Decker website and they'll send it via email. The cooking guide is only two pages - one page has an air frying chart for the more popular foods, and the other page has three basic recipes; kale chips, fries, and Buffalo turkey burgers, - but it's a start, and hopefully they'll add more information in the future.

***One-month update: We've been using the B&D Crisp 'n Bake oven almost daily for the past month and we're happy with its performance, especially the toaster oven capabilities which was the primary reason for buying the appliance - the air frying aspect was secondary. If you've never used an air fryer before (we hadn't), don't expect to get the same fried results that you would with regular deep frying. The term air "frying" is a bit of a misnomer - it should really be referred to as air "sauteing" instead. If air frying is your primary concern, consider a standalone air fryer unit such as the B&D Purify Air Fryer or the more expensive Philips Turbostar, both available on Amazon.

Everyone knows you get what you pay for in this world, and the Crisp 'N Bake oven is a budget model so you can't expect high-end results. It's like choosing a Toyota. There's the Corolla, Rav4, and Pathfinder. The budget model is the Corolla which is an affordable, dependable car that gets great gas mileage, but it lacks the acceleration and power of the more expensive models. The Crisp 'N Bake gets great toaster oven mileage, but lacks the air frying power of more expensive air frying ovens. If you want better performance, you can head to Amazon and look at the Cuisinart and Breville air fryer combo ovens instead, but expect to spend more money. We'd buy the Black and Decker toaster oven again, but we'd probably go with the wider model. With the regular-width model we can only use certain Pyrex dishes and our muffin tins won't fit due to the 12" width.

We grow our own vegetables but don't want to crank up the oven during the dog days of August when most of the vegetables are ready to be harvested, so the Black and Decker air fryer countertop oven will definitely come in handy to keep the heat out of the kitchen. Your needs may be different depending on family size and how much you're going to use the air fryer, but for us, the oven capabilities alone made it worth the price. There are better air fryer toaster ovens on the market, but they're considerably more expensive so we're happy with our purchase.