Our folding outdoor garden table has been up for several weeks and is working great, but there's no place for storing small hand tools and other oft-used garden supplies, so I started playing around with some PVC to see how hard it would be to create some kind of tool rack. The resulting tool rack is nothing fancy but it works well.

The cost for the PVC and fittings was less than $10 and the two 2 x 4s were just scrap lumber. The original post about the garden table (along with assembly instructions) can be found on the Folding Garden Table post.

The drain pieces were removed from the table to make it easier to work, but the faucet was left in place to make sure the PVC rack didn't interfere with the faucet. To make the tool rack I began by attaching the 2 x 4s to the table legs with 3/4" plastic PVC clamps. The 3/4" clamps are a tad too big, but 1/2" clamps were too small. It's advisable to use plastic clamps, not metal.

The tool rack uprights are 3/4" PVC, just shy of five feet long and they're attached to the 2 x 4s with the same plastic 3/4" PVC clamps that were used for the legs. The length of the PVC uprights was figured by measuring the tools that were going to be hung on the rack, adding in the tool hanger hook length, then adding a few inches just because. If the uprights are too long you can always cut them to a shorter length, but if they're too short, you're going to be making another trip to the hardware store for more PVC pipe. The horizontal top piece is 3/4" PVC that's attached to the uprights with two elbows. The tool hanger hooks are just #12 wire formed by wrapping the wire around a piece of 3/4" PVC. The #12 wire is easier to bend than #9 wire and is easily cut with a pair of lineman's pliers.

Right now the tool rack holds a trowel, cultivator, washcloths, ball of string, and paper towels. When adding tools to the rack, any heavier items should go close to the ends, next to the elbows.

We try to keep paper towel use to a minimum but they do come in handy so I added a paper towel holder onto the tool rack. The paper towels need to be removed from the rack if it's going to rain and that meant uncoupling the whole rack. A better solution was putting the paper towels on its own holder. It only requires two tees, two elbows, and some short pieces of PVC pipe. It's best to make the holder a few inches longer than the roll of paper towels so you have a way to grab the PVC and twist it to release it from the elbow. 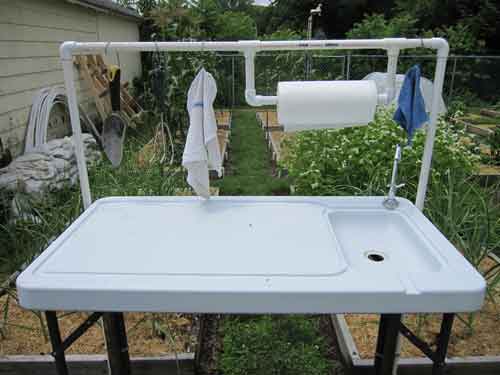 The PVC rack is nothing fancy, but it's a start, and makes the folding garden table much more versatile. I'll keep tweaking the design as need and as inspiration arises along the way.