Vertical gardening is a great way to expand the growing area of a small yard and a gutter trellis isn't that difficult to build. Strawberries, lettuce, along with many other leafy greens (chard, etc.) all adapt very well to being grown in gutters. Our trellis holds six half-sections of gutters and if you use scrap lumber it doesn't cost a lot of money.

Our vertical trellis needed to be sturdy but have a small footprint, and preferably be moveable by one person. While aesthetics were important, cost was an even bigger factor. The trellis ended up being five feet tall, five feet wide, and about 32" across at the bottom. It needed three ten-foot 2x4s (total cost $15) and the rest was scrap lumber.

I had a vague idea of what the finished product would look like, but wasn't working from any kind of plan. To get the angle for the A-frames, the 2x4s were laid out on the ground until it looked like a good width, then the intersecting point of the two 2x4s was marked. It ended up not being steep enough so I cut a bit more off the angle to make it steeper. Once the top angle looked okay, the bottom of the legs needed to be leveled off and the easiest way to do that was to temporarily attach the pieces of the A-frame together, stand it up, get it fairly plumb, then mark it as shown in the photo sequence below. Once the angles were cut, the first piece was used as a template to cut the remaining pieces.

The images below show the basic building sequence for the individual vertical trellis components. 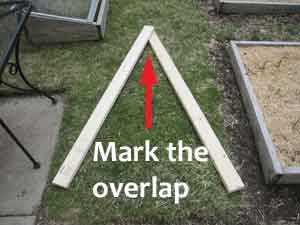 The arms that the gutters sit on were made from scrap lumber and the top arms are 2x4s while the rest are 1x3s. The rows of arms are spaced at 12" apart which is plenty of space for lettuce. To get an idea of the necessary arm length and angle, they were held in place with quick release clamps (Amazon) until the angle looked about right. The arms stick out about 5" and that seems to be working well for both the PVC garden as well as the gutter garden.

The images below show how the individual components were attached together to build the gutter garden. 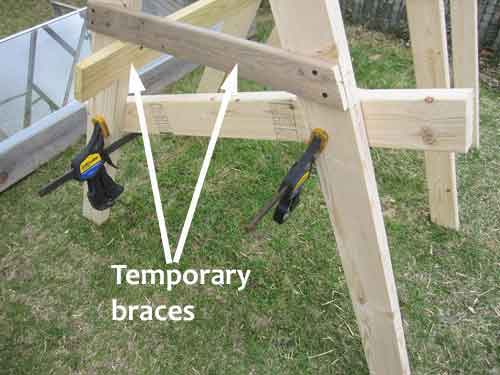 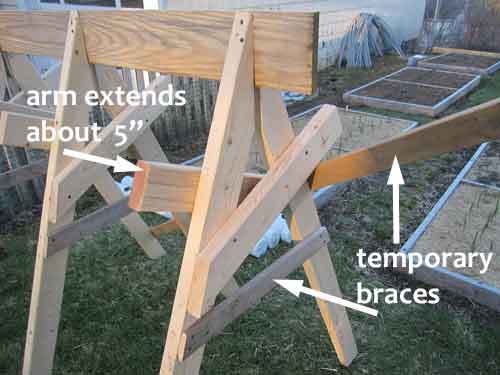 The arms are screwed to the A-frames on alternating sides. There's one linear brace along the bottom and a diagonal brace on the opposite side. The trellis is very sturdy and although it's awkward, it can be moved by one person. 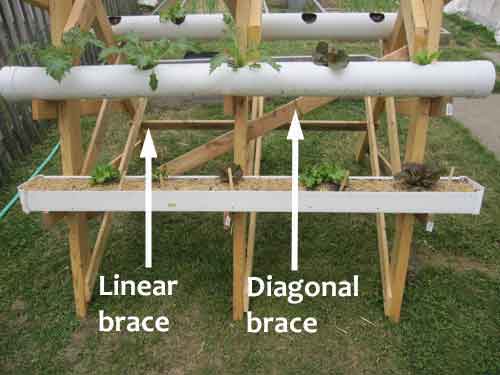 *Update - This vertical trellis worked well in the beginning, but it proved too cumbersome to move around the yard once the vegetables matured and grew out into the adjoining raised bed aisles, so instead of one large gutter trellis, there are now two smaller trellises. You can see the new smaller trellises in the Vertical Garden Trellis post.