Our first vertical garden trellis built for growing lettuce in a gutter garden worked well in the beginning, but it proved too cumbersome for one person to move around the yard in order to give the lettuce some relief from the sun. A redesign was in order so the first trellis was dismantled and the pieces were reused to make two smaller trellises. Now instead of one large vertical garden trellis, there are two small ones.

The trellis is made up of a 2 x 4 upright, a 1 x 4 spacer block, and the 2 x 4 angle piece from the first trellis. You can see how the angles were cut in the Gutter Garden Trellis post. The three pieces are bolted together with two 4.5" carraige bolts and the 1 x 3 arms holding the gutters are sandwiched in between the 2 x 4s, very similar to the first design. Each trellis needs three of these legs. Other than three more ten-foot 2 x 4s, (cut in half for the uprights) the only thing we needed to buy was a 1/4" spade bit because the regular drill bit was too short to drill through all three pieces of lumber at once. Here are a few photos of the basic building process: 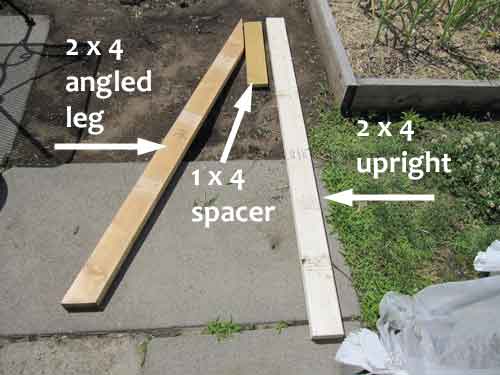 Trellis arms: The arms were cut the same as with the first trellis - by holding them in place with quick-release clamps we bought on Amazon until they looked like they were at a good angle and length. The three rows are spaced 12" apart, similar to the first trellis. The bracing is also similar with a linear brace on top and bottom, and one diagonal brace. 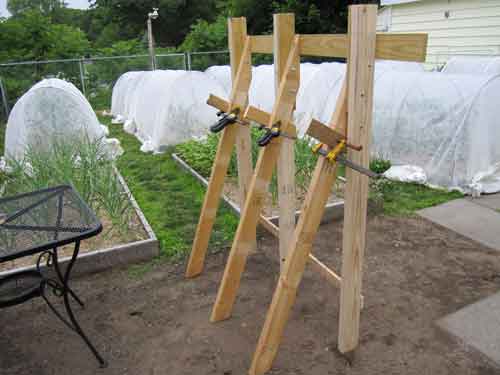 The design was somewhat predetermined because the legs were being re-used from the first trellis, but the new trellis is sturdy and much lighter in weight, as well as less awkward to handle. The uprights and top brace are about 6" longer than they need to be, but the excess can always be cut off later. The extra width helps spread out the shade cloth and keeps the cloth from pressing on the leaves of the vegetable plants inside the gutter. The image below shows the shade cloth draped over the trellis: 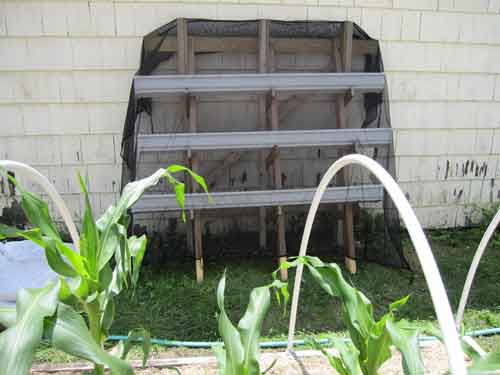 The new trellis takes up a lot less space and is easily moveable by one person, even given the tight space and having the surrounding crops in full bloom. Having two small trellises instead of one large trellis is better because we'd like to try growing herbs in the gutters and they need more sun than the lettuce, so one trellis can be placed in the sun and the other in the shade.