When setting up a gutter garden earlier this year, a PVC garden seemed like a good way to compare the two growing systems and so we decided to make one of each - a gutter garden and a PVC garden. The PVC garden was easy to build using basic tools such as a tape measure, drill and a holesaw.

There are several grades of PVC but you don't need anything special, so the least expensive grade will work fine. A ten foot section of 4" PVC pipe was $9.98 and the endcaps were $3.50 each, so the cost for two five-foot sections came to $23.98 (one section of pipe and four endcaps) which is a bit more expensive than the cost for the gutter garden (which was $17.71 for two five-foot sections). You don't need any caulk, glue, or sealant for the endcaps - they just attach to the end of the pipe. The PVC pipe is easy to cut with just a hacksaw. Both the gutter and PVC were cut into five-foot lengths in order to fit on our Vertical Garden Trellis.

The spacing for the holes was based mostly on leafy greens which are typically a 12" spacing, so the first layout was 4 holes per five-foot length of pipe, but that spacing was too far apart so all the rest have 5 holes per five-foot length. The opening drilled into the PVC pipe is 2.5", which is plenty of room for the plants to grow, but it's a bit of a tight squeeze when transplanting seedlings from Jiffy pellets or small cell packs. 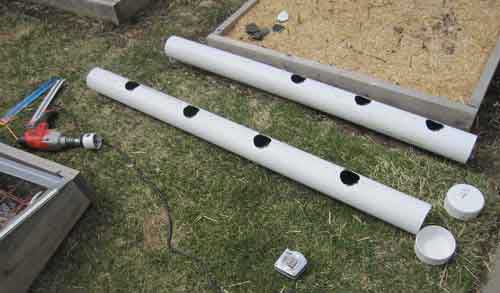 If you have a decent cordless drill it might have enough power to drill the holes, but my cordless is just a basic model so the corded drill was a better choice and it took next to no time to drill the holes. The drill is a Black and Decker with a 1/2" chuck but a smaller 3/8" corded model would have plenty of power. To help with accuracy a small pilot hole was drilled with the cordless drill first, then the holes were cut with the holesaw. There are five or six 3/8" drainage holes in each section and they're placed in between the large holes not directly underneath them, which should encourage the water to spread throughout more of the soil instead of draining right out the bottom.

Filling the PVC pipe with soil:

The PVC pipe was filled with soil by attaching one endcap, covering the holes with duct tape, then adding soil into the pipe. Tapping the pipe with a hammer once or twice helps to distribute the soil throughout the pipe. Once the PVC pipe seemed full, the other endcap gets attached and the whole pipe is tapped on the ground a few times. Any low spots can be filled from the top holes once the duct tape is removed. 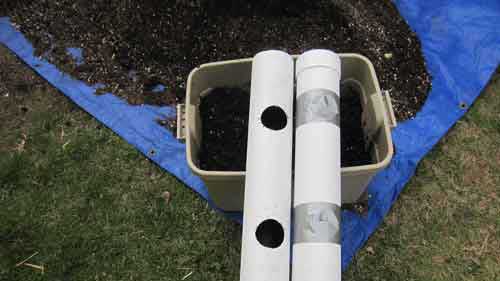 The 2.5" Porter Cable holesaw was purchased locally at Lowe's for $14, and it came ready to go right out of the package, meaning I didn't need to buy a mandrel separately and figure out which mandrel fit which holesaw. There were other more expensive options but since PVC is a thin material and my drill has plenty of power the less expensive holesaw was fine. The holesaw doesn't get the greatest reviews on Amazon, but the reviewers don't say what they were drilling through nor what they were using to power the holesaw (i.e., corded or cordless drill). If you plan to use the holesaw to drill through a 2" solid core oak door with a cordless drill you may have quality issues, but for drilling holes in PVC the holesaw didn't have any problems. The same size DeWalt holesaw gets better reviews on Amazon, but you'll need to spend another $10 or so for a mandrel. 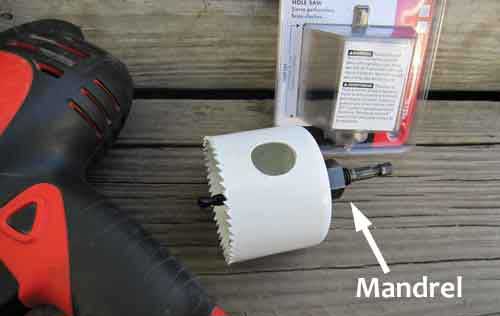 The first lettuce planted in the PVC garden was Mizuna, Magenta, and Bergam's Green (the Mizuna is pictured below). Some of the lettuces were direct seeded and some were transplants and they all did well once they got established but as mentioned earlier, it was a tight squeeze fitting the transplants into the 2.5" holes of the PVC pipe. The other lettuces pictured below the PVC garden are in a gutter garden (you can read more in the Gutter Gardening post). 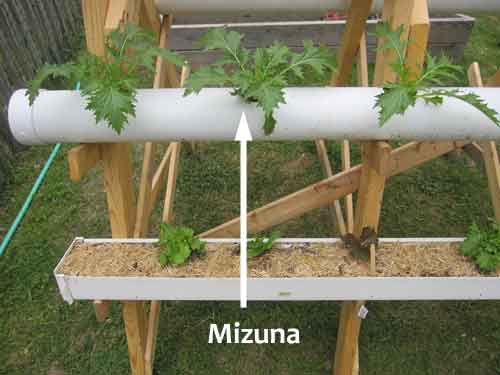 So far we've only grown lettuces in the PVC garden, but the spacing looks like it will work for other leafy greens like chard or kale as well as herbs, so that's the next project.